Charles Frodsham & Co. is the longest continuously trading firm of chronometer manufacturers in the world, their name synonymous with precision timekeeping instruments of the highest quality.  Charles Frodsham, the eponymous founder of the company, bought John Arnold’s company in 1843 so the tradition of chronometer making is very old indeed.

When renowned horologist Derek Pratt decided to build an exact replica of Harrison’s famous but complex H4 chronometer, he was unable to finish it due to ill health and turned to Frodsham to complete the task (as described on their website →).

Frodsham also built a replica of H3 requiring 1170 separate parts, taking two and a half years.

There exist many good clockmakers, likewise many good animators, but I don’t know of anyone who combined those two disciplines as effectively as John Redfern. 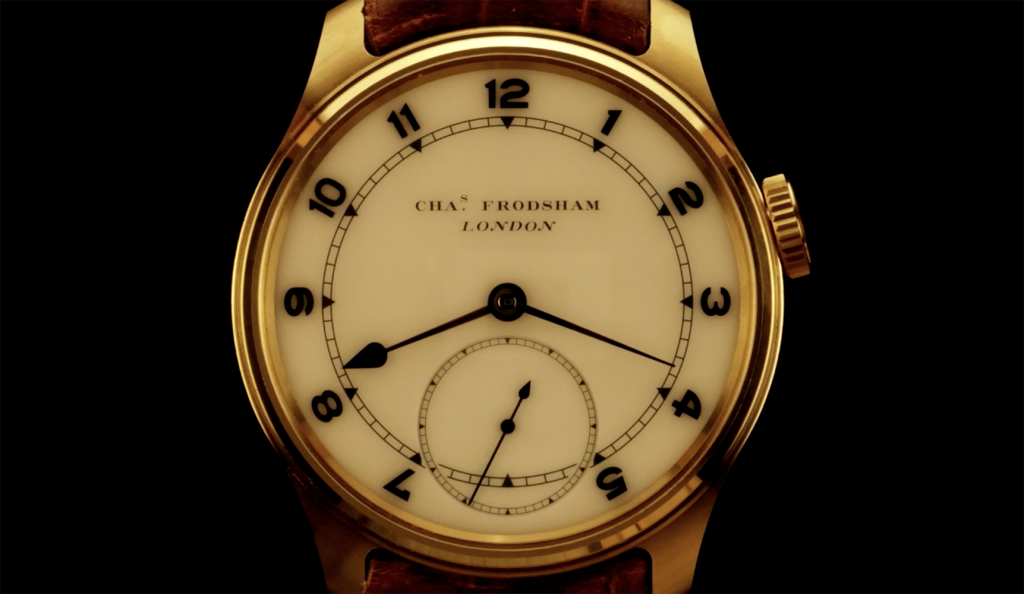 This is the first wristwatch to utilise the Daniels Double Impulse Chronometer Escapement. The escapement is completely oil-free. 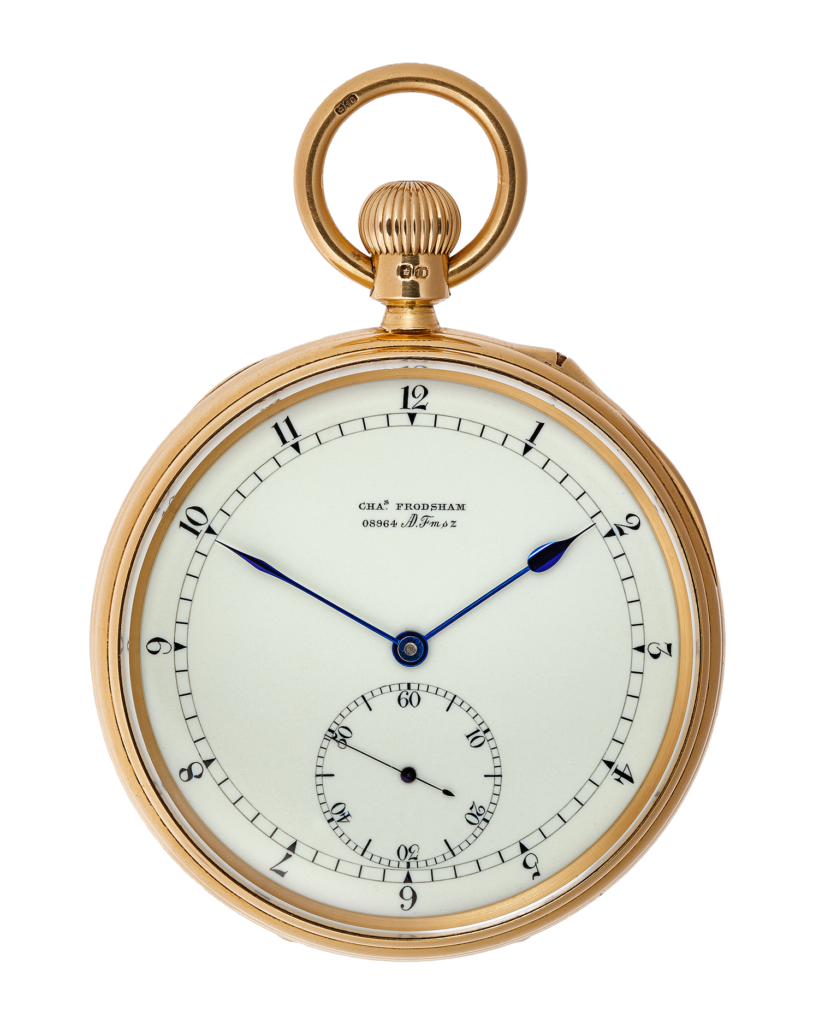 The design of the dial is inspired by a Frodsham tourbillon watch from the early 1900s. Although looking conventional at first glance, the minute tracking is inside the ring of hour numerals, allowing the hour and minute hands to be of equal length, and giving greater clarity for time-telling.

The quest for an oil-free escapement

A practical oil-free escapement has long been the Holy Grail of watch design. In most escapements the escape teeth slide across the pallets creating friction, and this requires lubrication. The oil gradually deteriorates; this eventually affects the timekeeping and can damage components.

Better oils and improved designs that minimize sliding friction have reduced the need for oil but have not eliminated it; replacing old oil is a servicing requirement in even the finest timepiece.

Breguet devised an oil-free escapement, the échappement naturel, in 1789. He geared two escape wheels together, that impulsed the balance alternately without the sliding action, thus eliminating the need for oil. In practice the design proved over-complicated and few such escapements were produced.

George Daniels, widely regarded as one of the outstanding watchmakers of the 20th century and a great admirer of Breguet, returned to the underlying idea of this escapement and finally perfected a practical oil-free design – the independent double-wheel escapement. 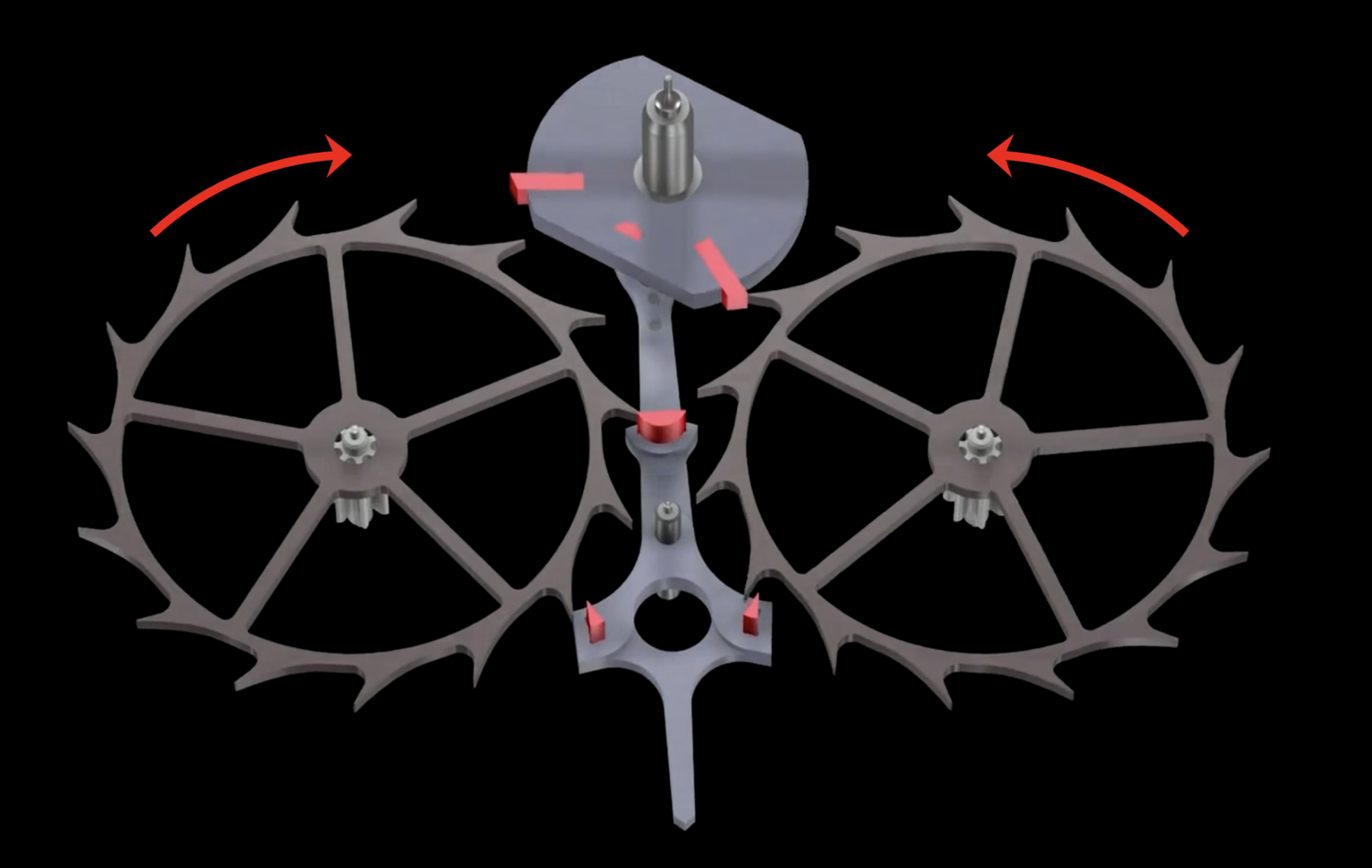 Each of the two escape wheels is driven by its own mainspring and train of wheels, so each side is independent of the other; this eliminated the play or backlash that caused Breguet such difficulties. Daniels introduced his design into a number of his own pocket watches in 1976, but noted that it would be difficult to miniaturise to wristwatch dimensions due to the tight tolerances required in the component manufacture.

Charles Frodsham & Co responded to a suggestion by their close collaborator Derek Pratt, and accomplished this feat of miniaturisation in 2018 after some 16 years of development.