England has produced many great clockmakers notable for their innovation, skill and flair, and pre-eminent among them is John Harrison, a carpenter from Foulby in Yorkshire. Born in 1693 he received no formal education but became fascinated by precision timekeeping. His early 1720s wooden clock at Brocklesby Park is still in good working order and has never needed lubricating. It incorporates an escapement of his own design – the ‘Grasshopper’ escapement.

The wood he used for the bearings of his early timekeepers, lignum vitae, is self-lubricating – and remains so to this day. And the way the legs jump away from the teeth in the escape wheel mean that there is almost no friction or wear, even after 300 years.

He went on to design long-case clocks that were accurate to a second a month, far outstripping any other clocks at the time.

Maritime navigation underpinned world trade and was vital to British interests; but finding your position at sea was difficult and small mistakes could – and often did – lead to disasters. You could determine your latitude fairly precisely, but longitude was a much more difficult problem.

There were two possible ways.

Firstly, the lunar distance method which involved measuring the distance of the moon from certain stars and using astronomical tables to calculate your location.

The first method was slow and cumbersome; the second was thought to be impossible – even the great Sir Isaac Newton had said so to a Parliamentary Committee in 1714: no known clock could work accurately amid storms and changing temperature, humidity and barometric pressure, not to mention variations in gravity and the pitching, rolling and yawing of a ship at sea. 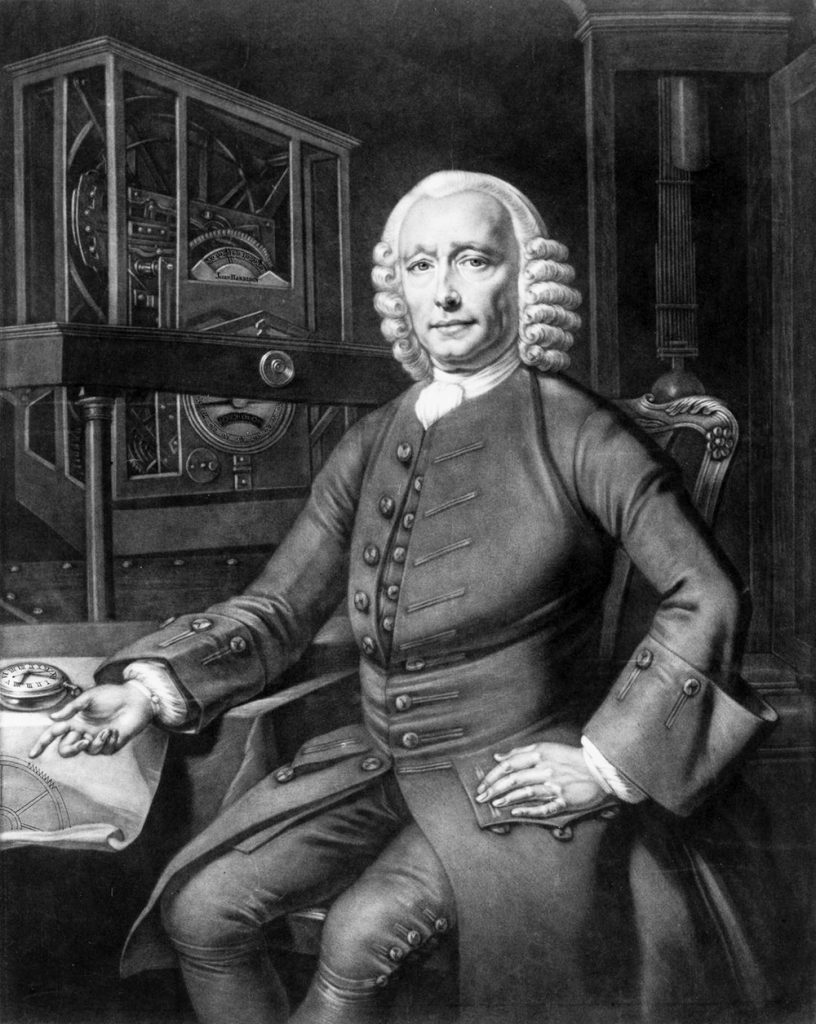 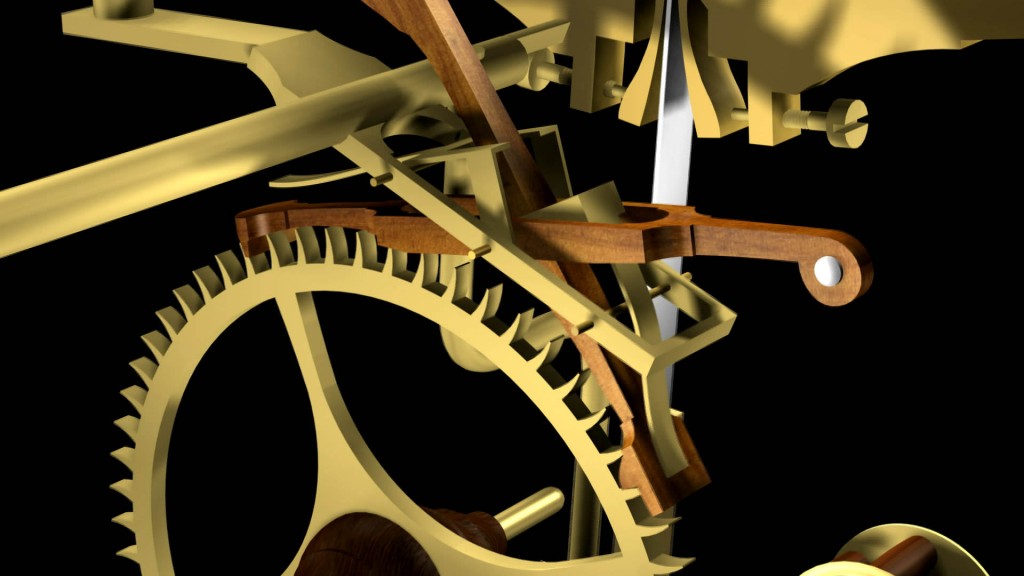 The animation was created for the Excitement of Time exhibition at the Royal Society, London in June 2006.

John Harrison spent 5 years building his first marine timekeeper, now referred to as H1. Instead of a pendulum it had two linked dumbbell balances to compensate for movement. It was large and in its case took up much of the space in the captain’s tiny cabin.

On its first sea-trial to Lisbon and back, it proved its value on the return leg by correcting the longitude of the ship and preventing almost certain disaster. Harrison however, always looking for improvements, was not satisfied and so set about making a second marine timekeeper. 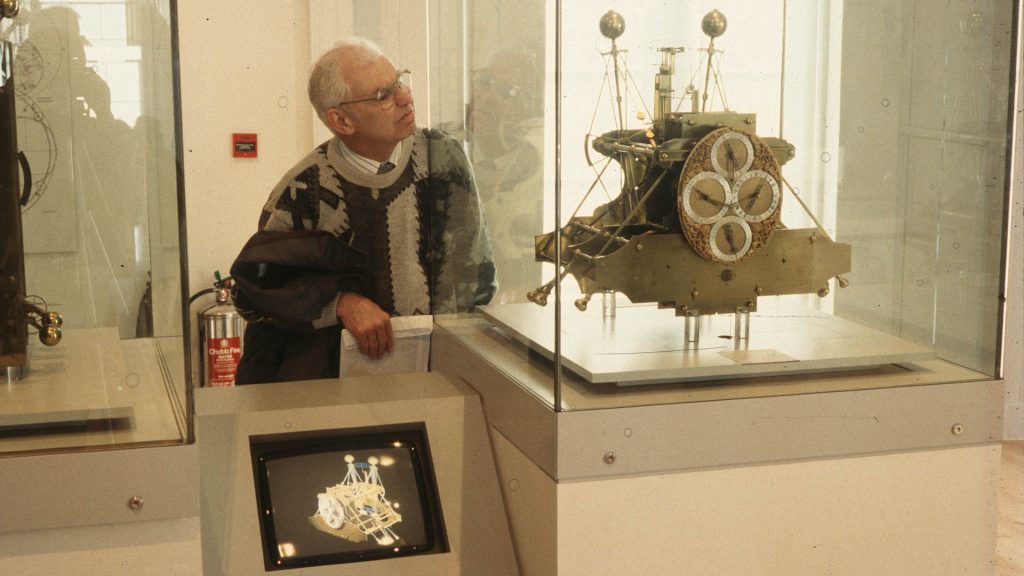 The picture above shows the animation displayed alongside H1 to enhance the visitors’ experience by providing a greater understanding of the famous timepiece. The key features of the clock, such as the opposing balances and the anti friction bearings which required no oil, were highlighted and explained. 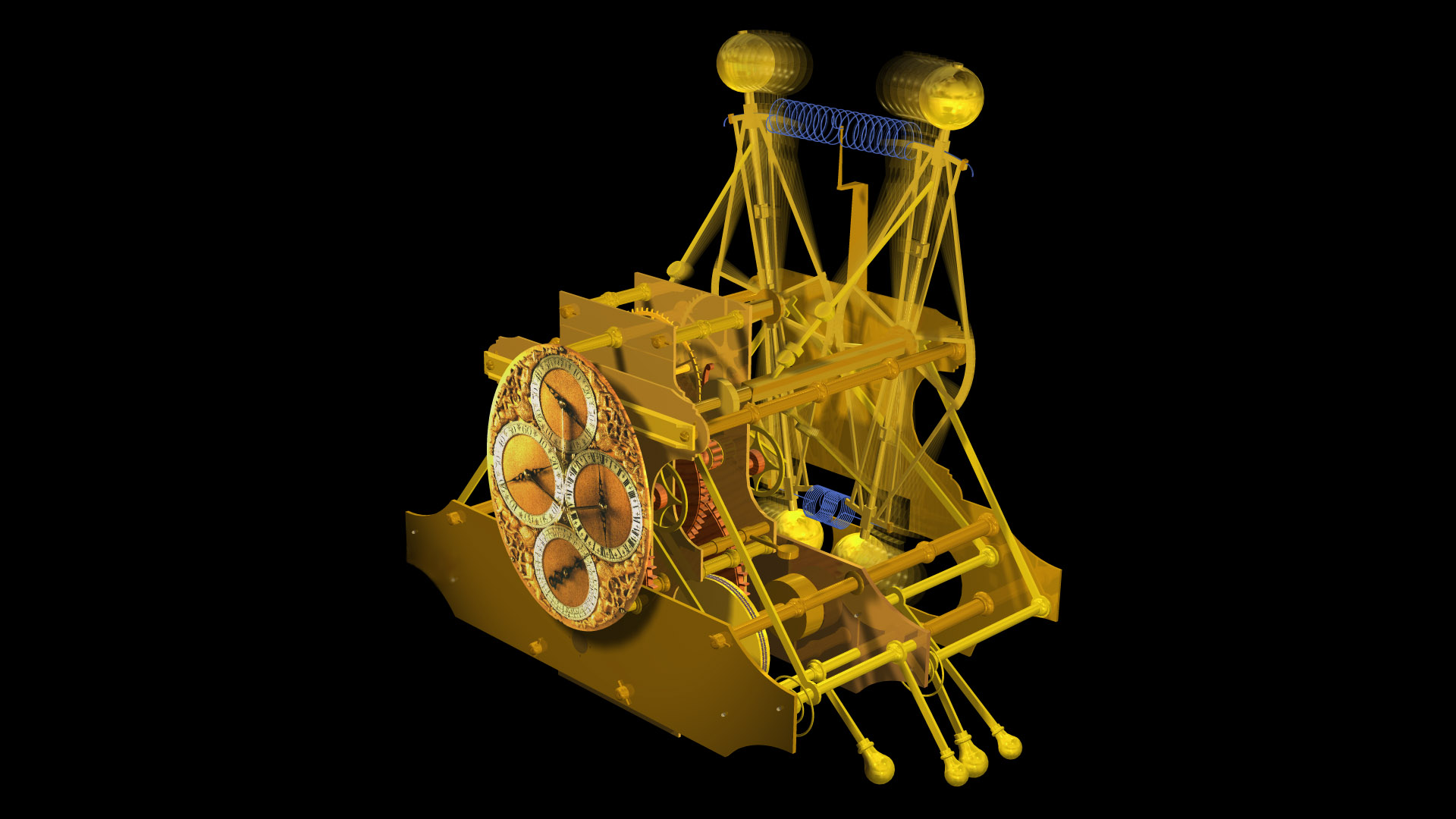 This is the original, pioneering animation (1993) installed at the National Maritime Museum, Greenwich, London. 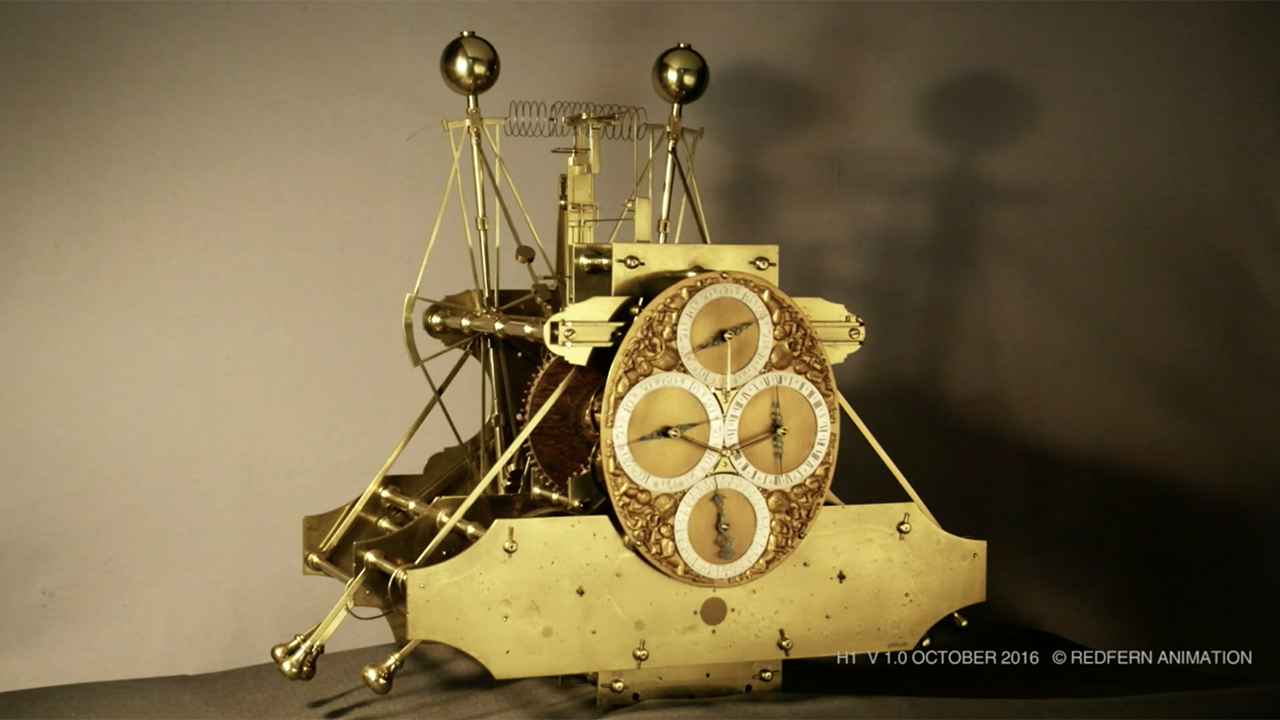 This is a later, experimental version combining animation seamlessly with computer-controlled camera work.

…I liked the way the rocking, interconnected components kept their steady beat, even as the cartoon clock tilted to climb up and then slide down the shaded waves. A visual synecdoche, this clock came to life not only as the true time but also as a ship at sea, sailing mile after nautical mile over the bounding time zones.

Harrison felt that H1 could be further improved and started work on a new version, H2, pictured. This clock contained many improvements, including a more reliable and constant source of power to the escapement – the remontoire – and better temperature compensation. But he soon realised there was a fundamental design flaw as the clock was susceptible to errors occasioned by sharp forward-and backward rotational movement.

Although the H2 passed rigorous testing, Harrison was dissatisfied with it and started again on a new clock. H2 was never trialled at sea. 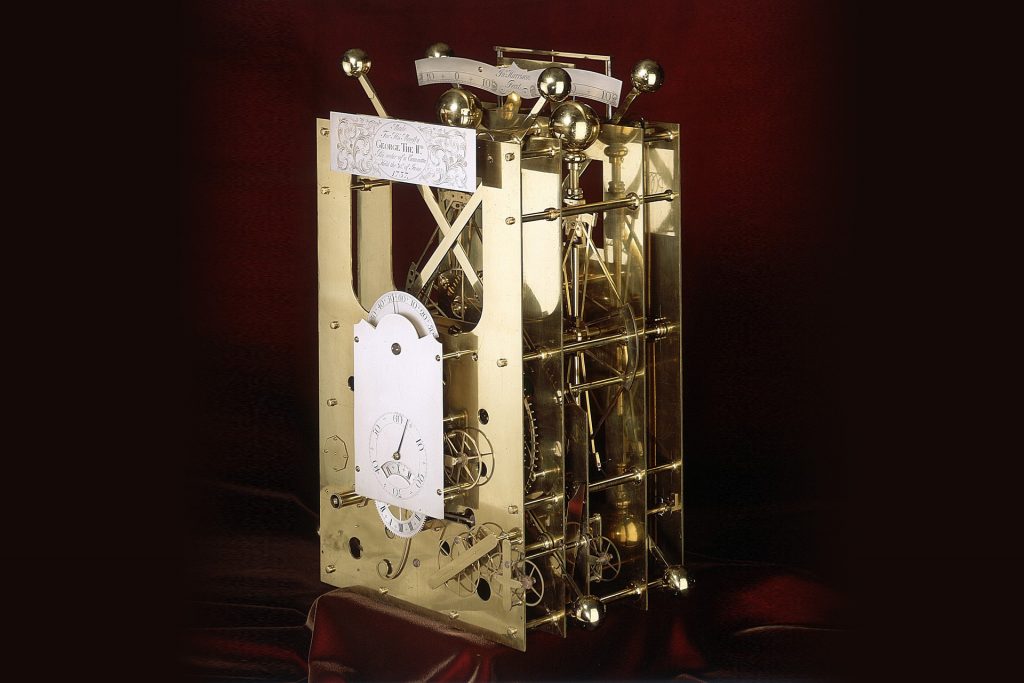 Note: this picture is for reference and is not an animation.

H3 took some 19 years to complete, by which time Harrison was in his late 60s.

The clock incorporated many of the features of H2, but significantly used a pair of linked circular balances rather than the dumbbell balances in H1 and H2.

Two further innovations were the caged roller bearing to minimise friction and the bimetallic strip to combat changes in temperature, two devices that remain in wide use today.

Like H2, H3 never underwent sea trials as Harrison had devised a new and better solution – his famous timekeeper H4. 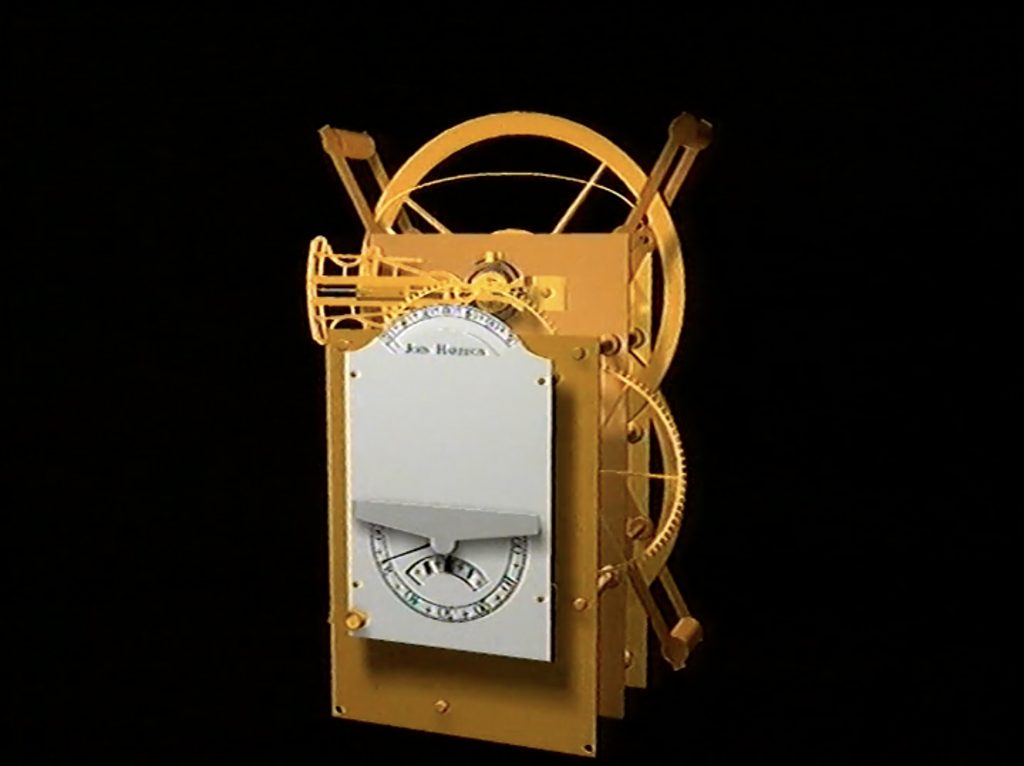 Pocket watches driven by a mainspring had been around for many years but were very inaccurate compared to pendulum clocks, being incapable of accuracy of less than a minute a day.

In the early 1750s while working on H3, Harrison designed for himself a relatively conventional-looking spring-driven pocket watch which he had made for him by John Jeffereys. This included a number of novel refinements including temperature compensation and a larger balance than normal, oscillating faster and at greater amplitude.

The going of his new watch pleased him so much that he recognized that a spring-driven watch could potentially solve many of the problems H2 and H3 had revealed.

After six years of work and innovation he developed the watch that came to be known as H4, accurate enough to solve the Longitude problem. It was the first true marine chronometer and is now recognized as one of the most important watches ever made. It proved that spring-driven watches could perform well enough to determine longitude at sea.

It was tested on a voyage to Jamaica where after a voyage of 81 days it was found to be just 5 seconds slow, equivalent to one nautical mile of longitude.

King George III tested the second version of this watch (H5) himself at the Kew observatory and after ten weeks of daily observations between May and July in 1772, found it to be accurate to within one third of one second per day. 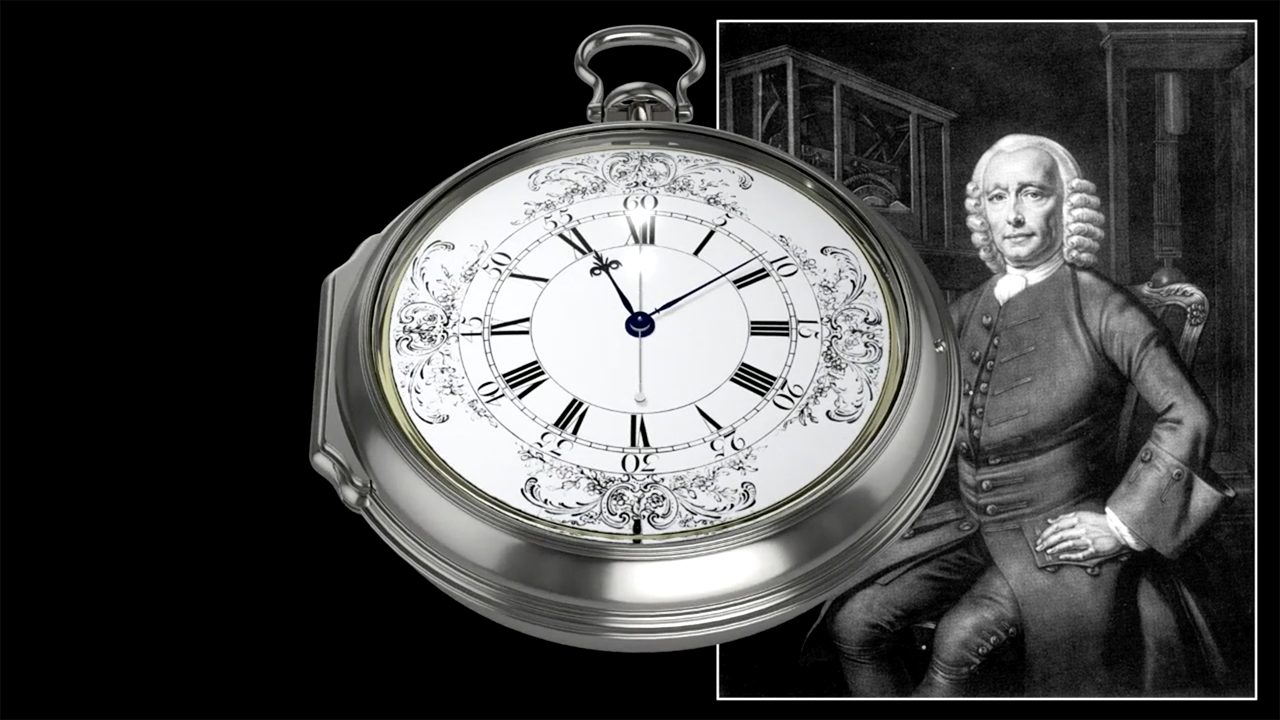 The animations of the H4 were created in close collaboration with the eminent horologist Anthony Randall for a lecture he gave at the Longitude Symposium in November 1993 on John Harrison’s very complex remontoire. Many attendees said afterwards that it was the first time they could really see and understand the remontoire.

Anthony Randall was the recipient of the Tompion Gold Medal in 2007. The animations are used with his kind agreement.

The presentation was brought to life with an amazing computer animation of the mechanism, superbly modelled and actively explaining all the complexities of the mechanism in a way no photographs could achieve. 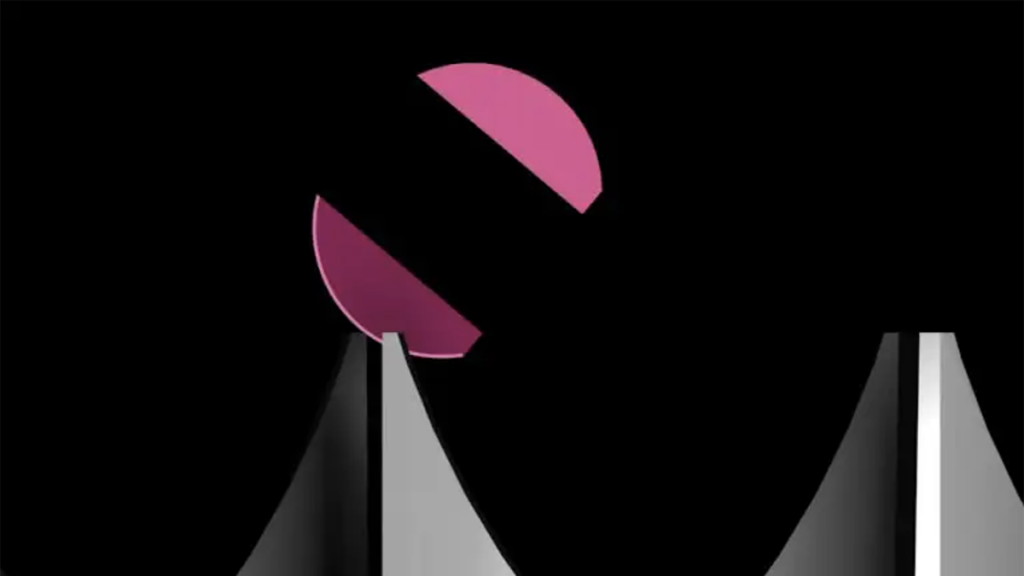 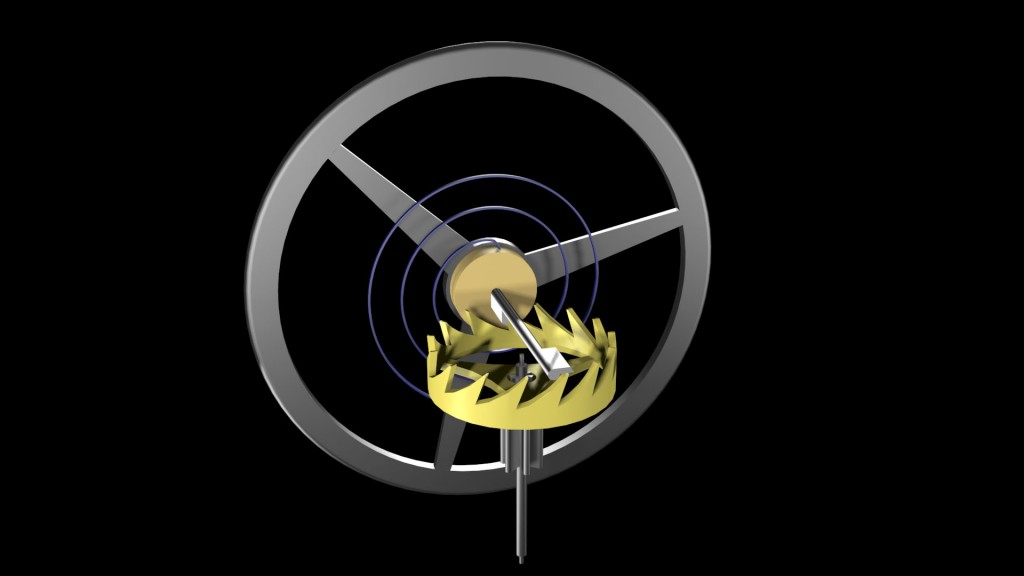 Among Harrison’s many innovations was his adaptation of the simple verge escapement to something that looks similar but works quite differently and produced a major improvement in accuracy.

You can see that in a traditional verge escapement (lower left) the pallets are flat, set at an angle of around 90° to each other, and were usually made of steel. They stop the escape wheel momentarily, recoil slightly, then release it and are given a small impulse which is transferred to the balance to keep it swinging. The impulse starts when the balance is stationary and it swings through roughly 90°.

Harrison’s escapement (upper left) had D-shaped pallets made of diamonds just 2mm long, and set parallel to each other. You can see in the animation that as the amplitude of the balance is larger, the pallets stay in contact with the escape wheel for longer – the white lines on the edges of the pink pallets indicating contact.

This longer contact continued while the balance was moving, giving a swing of around 270°. These improvements reduced the influence of the driving force and increased that of the balance which itself was larger, proportionally heavier, and moved much faster than a verge balance. The resulting higher energy greatly increased the accuracy of the movement as a whole.

A certain size is best for the pallets, or rather a certain proportion between the diameter of the circle described by the edge of the pallets and the diameter of the balance-wheel. This was first suggested to Mr Harrison from bell-ringing; for he could bring the bell better into a motion, by touching it from time to time somewhere near the centre than the near circumference; because in the first case his hand moved quick enough to follow the bell.

The less the Wheels have to do with the Balance, the better.

Further information
The Harrison timekeepers are at the National Maritime Museum in Greenwich, London.

John Harrison and the Quest for Longitude
by Jonathan Betts

Understanding how a complex mechanism works can easily be confusing and overwhelming, but, when John Redfern’s animations identify and explain the action of each of its individual components, its overall operation is immediately clarified. With this new perspective, how can anyone not admire — and be inspired by — the extraordinary ingenuity of those pioneers of mechanical timekeeping? Animating time was John’s way of sharing his love and passion for horology.