This animation is also shown in the section How Clocks Work → 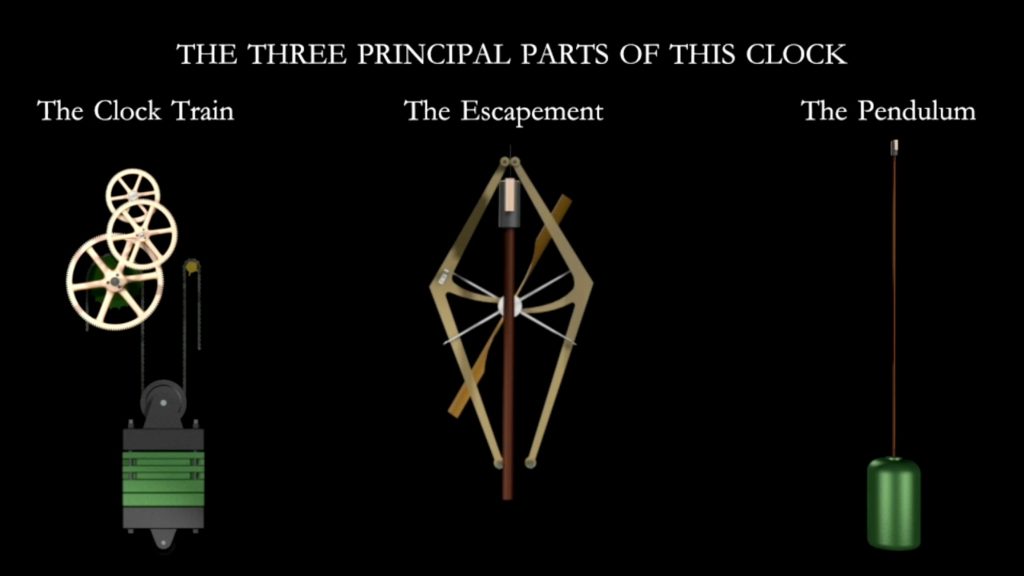 This clock was made and installed in 1929 after the Courthouse was rebuilt following the 1925 earthquake.

It is a rare Model 18 tower clock constructed by the Seth Thomas Company, a leading American clockmaker.

Sitting in its musty tower room since 1929 with the public only aware of its exterior clock faces, David Bisno and his wife, Fay, teamed up with local clock collectors Dick and Maryan Schall in 2010 to turn the tower room into a sparkling gallery of horological history featuring the restored tower clock as the centerpiece.

The animated video, as received in Santa Barbara from John, was originally silent. When it was determined that, as a teaching tool, the film would be more effective accompanied by audio describing what the viewers were seeing, voice description was added, with text and electronics developed by David Bisno, Mostyn Gale and Bryan Mumford. 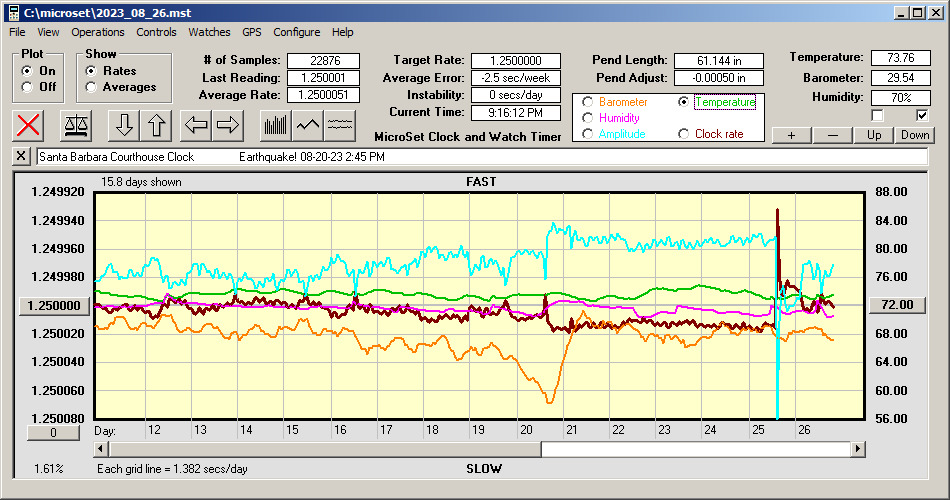 This graphic records to an accuracy of a millionth of a second the movement of the pendulum as it breaks a light beam on each swing. The graphic is updated every 60 seconds.

Atmospheric measurements are taken from a sensor within the clock frame:

1 AMPLITUDE is technically an analog of the amplitude of swing. It is actually a measurement of how fast the pendulum moves through the optical sensor. If the pendulum is moving fast, it is assumed it will swing wider. So the “units” are uncalibrated and the scale is relative. Nevertheless, it is a good indicator of changes in amplitude while the clock is running. If the pendulum begins to lose amplitude, it is immediately apparent.

2 CLOCK RATE The period of the pendulum is 2.50 seconds. The “beat time” is 1.250 seconds. This is why the midpoint of the graph is kept at 1.25000. The resolution of the MicroSet in this installation is one microsecond (.000001 seconds). In the graph, each grid line represents a change in beat time of 10 microseconds. Typically the rate is consistent to a few microseconds for weeks at a time.

The units at the right side of the graph correspond to the currently selected parameter in the box at the top of the graph. In this example, the radio button for “Temperature” is selected and the units shown are degrees Fahrenheit.

For further information link to the Bisno Schall Gallery →