Mudge’s escapement is based on an ordinary verge escapement but the escape wheel, instead of impelling the balance directly, alternately winds and releases a pair of small spiral remontoire springs to a given tension, and these in turn keep the balance in motion.

The balance is rigidly mounted on a ‘cranked staff’ (i.e. an axle bent so that it can freely pivot around the escape wheel). In line with the axis of the balance are two smaller staffs with assemblies of pallet, horizontal pin and small remontoire spring; the upper assembly being a mirror of the lower.

With the balance rotating anti-clockwise, a tooth of the escape wheel, acting on the lower pallet, has wound the lower remontoire spring past its resting position and is locked on the pallet. When the balance has swung beyond its resting point the vertical pin meets the horizontal pin of the lower pallet and carries it round, unlocking the tooth previously locked on the pallet and winding the remontoire spring further. At the same time, the escape wheel, now free, rotates under the influence of the mainspring and the next tooth acting on the upper pallet winds the upper remontoire spring and locks onto the pallet.

The balance on its return picks up the upper horizontal pin after swinging past its resting point and again unlocks the escape wheel, which rewinds the lower remontoire – and so on.

“Theoretically very perfect, but far too complicated for general use.”

“The detailed refinement of the machine is almost incredible… and no timekeeper ever made was so beautifully finished.” Ibid pp78, 79.

Mudge’s most important contribution to clocks and pocket watches was his invention of the lever escapement around 1750. Somewhat overlooked by Mudge himself it created little impact in his lifetime; but it slowly became recognised as one of the outstanding improvements to timekeeping and remains in widespread use today. Several animations on this website show lever escapements in action, including Arnold, Earnshaw, Patek Philippe, Frodsham. 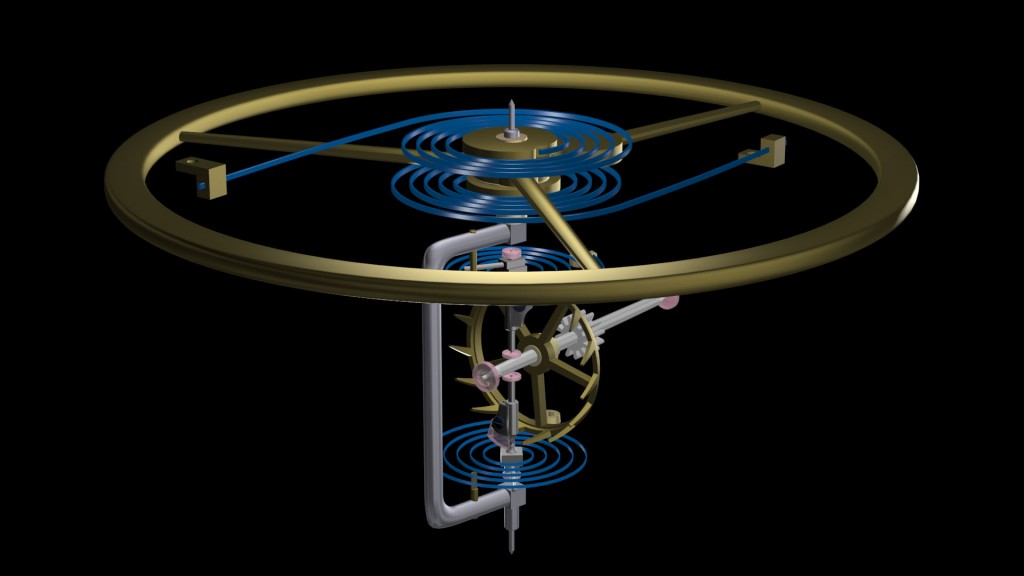 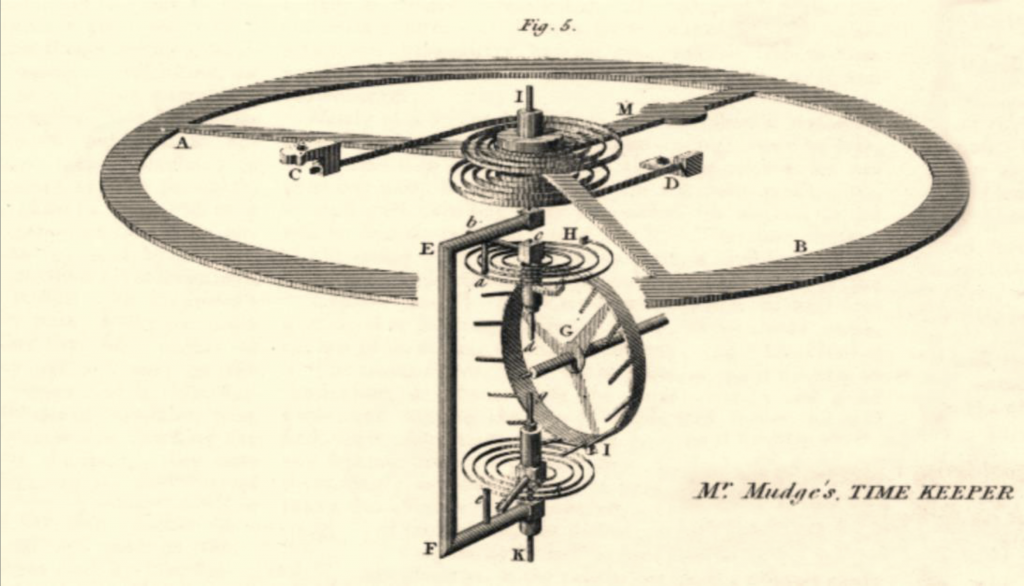 From the drawing by Mr Pennington, one of Thomas Mudge’s original workmen.

This animation was created in close collaboration with the eminent horologist Anthony Randall for his lecture to the Antiquarian Horological Society in 2005 and used with his kind agreement.

Anthony [Randall] then described one, Mudge ‘Green’, at length, illustrating its construction with splendid photographs. For most, however, the pièce de résistance was the animated representation of the escapement prepared by John Redfern.